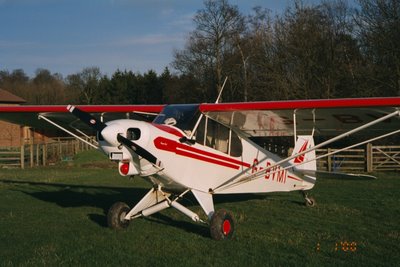 Most of my flying has been in gliders (sailplanes if you speak American), but now I live in a part of the world where conditions are poor for this sport. For this reason, and because my wife quite enjoys flying in light aircraft, I have become more involved in flying with an engine. Since late in the last century I have owned a 150 hp Supercub. 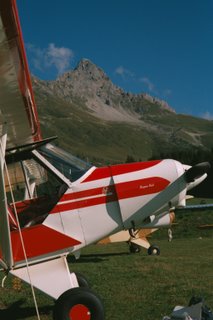 I think this is a nice picture of her ready to bed down for the night. She is at the French altiport of Méribel. It has an interesting runway. The bottom is at 5548' and the top 5636'. The length is a little over 1200'.

If you would like to land at my home strip, 1020', click below. It was an unusual day in that the cross wind from the left was not strong but quite turbulent. I think we were under a rotor. 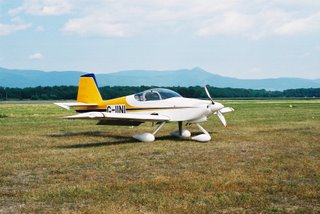 Recently, I built a VANS RV-9A. She first flew in the spring of '05 but after some 40 hours I sold her, later that year. Nice plane, but not very exciting. The nosewheel is not much use on soft ground either.

Again the picture is in France, but that is coincidence. We live in the North UK.